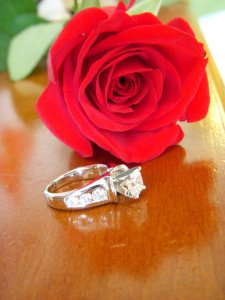 It was three years ago this month when I proposed to my wife. We had been together for a long, long time. I finally felt comfortable with where I was in my career and found myself with the means to propose and then (barely) afford a wedding. I decided I was going to plan out the proposal and make it special. My wife is a huge Disney fan so I pitched the idea of going to Disney for her birthday. I wanted to get a room at a nice hotel with a balcony and view of the Disney Castle. They have a fireworks show and that is when I would propose.

The day we were flying out I was more than stressed as we were waiting at the airport to go through security. I had the ring in my carry-on bag and watched it like a hawk as the security line got backed up but my bag was waiting for me on the other side. I swear I would have been arrested if I saw anyone so much as touch my bag because I would have charged through security.  I was visibly irritated, but my wife is used to that so she just told me to calm down.

When we arrived at the Grand Floridian I felt like VIP. We were greeted at the front door by name by one of the hotel representatives. She proceeded to walk us into the hotel, bypassed check-in, and walked us right to our room personally. The room was fantastic with a clear view of the Castle. I was excited. So far everything was going according to plan. Unfortunately my plan was to propose to her the next evening (because of the fireworks). I certainly could not put the ring in the room safe, so I stuffed it in a sock, in a shoe, in a bag, in the nightstand, which I rigged with a small piece of paper on top of the nightstand door, which would fall if someone opened the door, alerting me to the fact that someone had been snooping, which would have done nothing more than sent me into a mad rage and mild panic attack. Yes, I am a little off the wall.

We had a great time in the Disney parks, like two big kids, but my mind was on the ring most of the time.

The moment had almost arrived, we went back to the hotel, grabbed some food for the room and setup to watch the fireworks on the balcony. Out of nowhere it started to get very dark and gloomy. I started to get nervous. I only had that day of fireworks and slowly it was slipping away from me. The heavens started falling. The rain was coming down so hard we had to leave the balcony. I was depressed, upset, letdown, angry, disappointed, and lost. I had no backup plan.  It wasn’t supposed to rain. I wanted everything to be perfect. We opened the curtains and pulled two chairs over to the window to watch the rain in the dark.

We probably sat there for 30-45 minutes just talking and watching the rain (all the while hoping that the rain would stop). I was trying to play other scenarios out for when and where I could propose the next day. In the middle of my thought I just stopped to watch her as she watched the rain. It was then that I realized that I do not make plans. I do not color in the lines. I do not follow the crowd. I do my own thing and I certainly don’t let anything rain on my parade. All the planning was just stopping me from doing.

Over the years I had fake proposed to my wife with bottle caps, 25cent machine rings, string and a number of other stupid things. I reached over and grabbed the coke can that was sitting on the nightstand, broke off the pull tab, grabbed some ribbon from the birthday gift I had given her earlier (crafting a fake ring) and once again fake proposed. “I know what will make this rain better, will you marry me?” She and I laughed at the pull tab ring. As she went to turn her attention back to the rain I pulled out the box with the real ring. I haven’t a clue what I said. I was shaking. I put the ring on the wrong hand. There were tears of joy. I am sure I said something amazing (I hope).

Outside, just as quickly as the rain had come it stopped. Fireworks slowly started to appear around the castle. I know it sounds like something I made up, but I didn’t. Everything worked out as “un-planned.”

Things don’t always work out as planned. I have learned that a very well thought out plan can restrict you. If you bind yourself to a specific path before you have even started on a journey, think of everything that you will miss because you are focused on staying the course because you have invested so much time in the planning. Spend less time planning and more time doing. You can put an immense amount of thought and energy into something, but things don’t always work out the way they are planned. That can completely side track you, ruin a moment, or cause you to abandon ship.